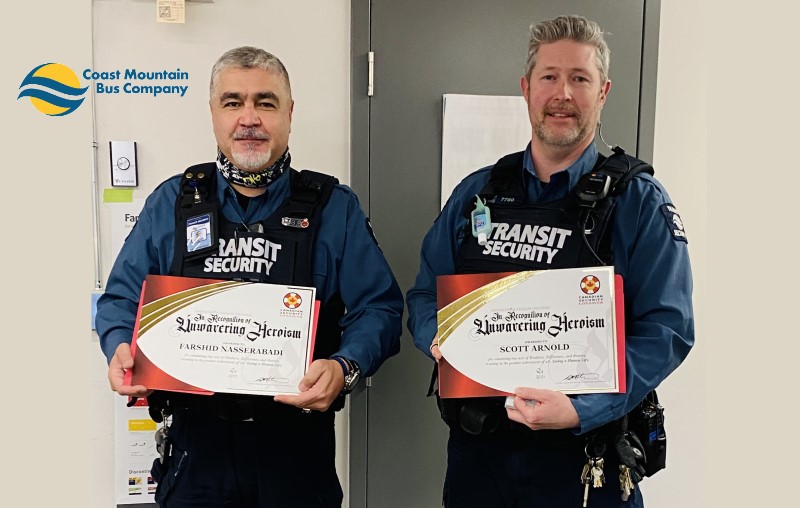 Transit Security Officers (TSOs) Scott Arnold and Farshid Nasserabadi at Coast Mountain Bus Company didn’t hesitate when they were called to respond to an unconscious, unresponsive male on a passenger bus in Vancouver.

Discovering the man had no pulse, TSOs Arnold and Nasserabadi immediately began chest compressions, which they continued even after Vancouver Fire Rescue & Emergency Health Services arrived on scene.

AED pads and a trachea tube were set up, and EHS administered two shots of Narcan. With everyone’s effort, the male was revived and transported to hospital.

Without the TSO’s quick response, commitment to CPR, and high levels of professionalism throughout, the outcome for the man could have been very different. In addition, Officers Arnold and Nasserabadi also spent time with the bus operator, who appeared to be distressed after witnessing the incident on his bus.

We wanted to highlight both officers’ efforts in this incident, both because their professionalism and training made a lifesaving difference in this case, but also because their commitment to their roles in the community meant that their work didn’t stop after the ambulance drove away: They knew that in the aftermath of emergency situations, it’s not just the injured people who need support.

Thank you, Scott and Farshid, for setting such a good example and looking out for all the members of your community!