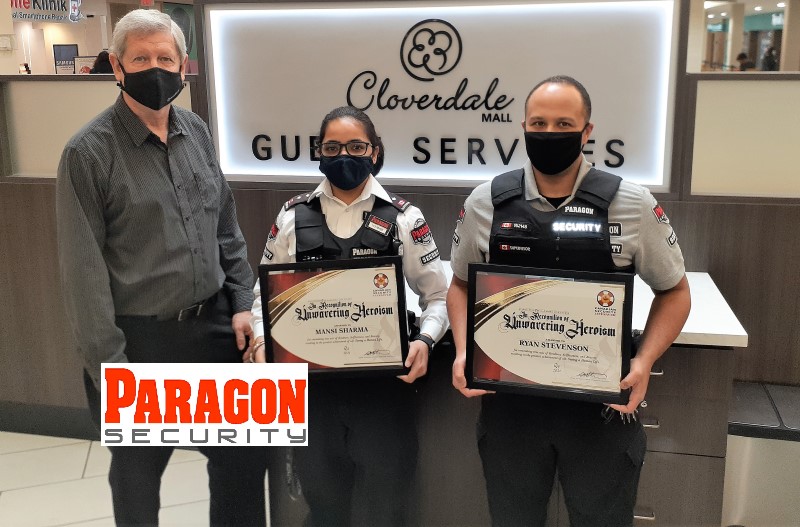 Quick-thinking and compassionate response at Cloverdale Mall in Etobicoke

In October 2021, Paragon Security Site Supervisor Ryan Stevenson and Security Guard Mansi Sharma were on duty at Cloverdale Mall in Etobicoke when they were made aware of a medical situation.

A woman and her elderly brother were in the mall when he suddenly collapsed and began to vomit blood.

Stevenson and Sharma immediately stepped in to support the man, calling emergency services and ensuring that the man was safe and calm until the paramedics arrived.

The man was transported to hospital where it was discovered that he had developed an aneurism and was suffering from internal bleeding. It became apparent that Officers Stevenson and Sharma’s swift actions had prevented the issue from getting worse. The man recovered in hospital for a few days and was then able to return home.

A family member contacted Paragon to express their appreciation of how Supervisor Stevenson and Security Guard Sharma had helped them throughout the situation, with support that exceeded any expectations the family member had for such a situation: “It’s been a while since I’ve come across strangers that go out of their way and show genuine concern for people – I am thankful that you have Site Supervisor Stevenson and Security Guard Sharma on your staff, and grateful for the help they provided us.”

Thank you, Ryan and Mansi – you continue to make a real difference in people’s lives!