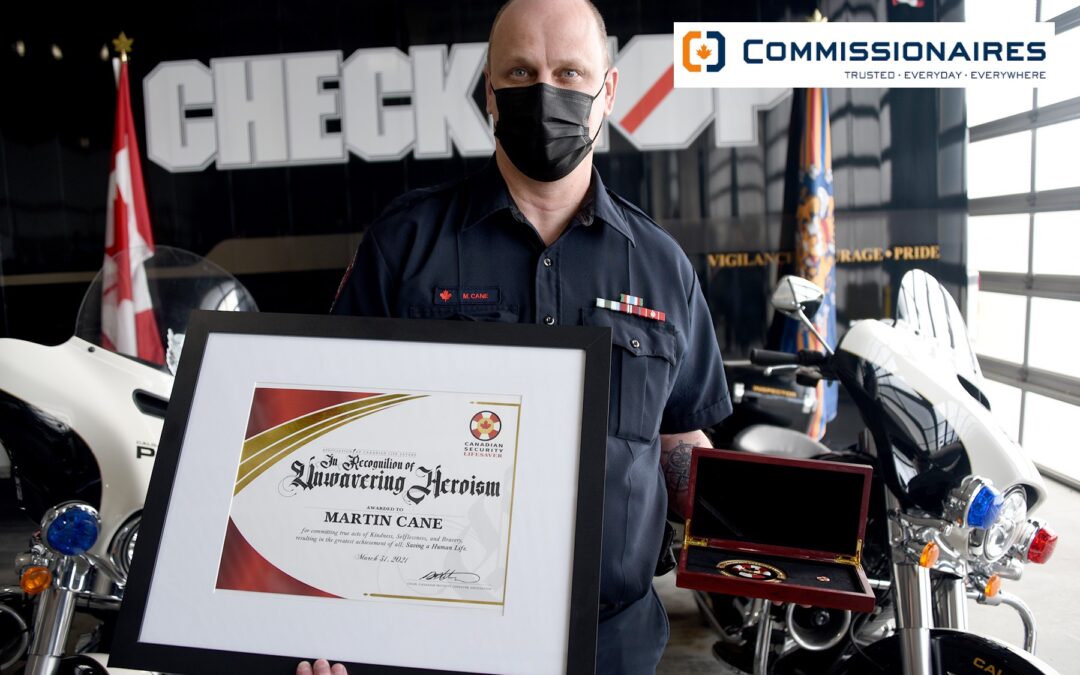 Martin (Marty) Cane, special constable, Commissionaires, is the recipient of the Canadian Security Lifesaver Association’s (CSLA) Q1 2021 award for his quick and decisive actions that averted further injury when a 10-year-old boy was attacked by a dog.

Cane is a veteran of the Royal Canadian Navy, serving from 1989 to 2014. He joined Commissionaires upon retirement and is currently assigned to a residential traffic unit with the Calgary Police Service. During 2020, he also responded to a call-out on behalf of the Canadian Armed Forces to assist where needed during the pandemic, remaining on active duty till Aug. 31.

“We believe at the CSLA and Commissionaires that Marty exudes what it takes to be a community leader, and a security and safety professional,” said Dennis Ellahi, COO, Commissionaires Southern Alberta and CSLA board member. “We’re very proud of you, Marty, and your accomplishments.”

Ellahi introduced Cane at the chapter meeting, who then described the events that led to the award nomination and win.

Cane was setting up a routine speed enforcement stop outside a school when he responded to a cry for help from across the street. A 10-year old boy was being attacked by a Rottweiler who had the boy’s arm locked in its jaws. Cane attempted to break the dog’s hold first by lifting the dog, then grabbing it by the ears. Finally, he struck the dog with the boy’s skateboard, which caused the animal to finally release its grip. The dog returned to a sitting position, said Cane, but the boy was clearly in severe medical distress.

The attack had not only seriously wounded the child’s arm but fractured a bone, he said.

Cane asked the bystander who had first cried for help to apply pressure to the wound using the boy’s jacket. He then radioed for help; EMS responded and immediately administered first-aid.

Calgary Police who also attended the scene declared Cane a hero. “I don’t consider what I did to be heroic. I just happened to be there,” said Cane, adding that his military background and training helped him manage the crisis situation. He also expressed his gratitude for the recognition and CSLA award. “It’s something I’m going to cherish forever, that’s for sure.”

Fortunately, the child has responded well to medical treatment since the incident, said Cane.

Cane’s quick actions in an emergency “says so much about security as a whole,” said Jody Reid, chair of the ASIS Calgary chapter and a CSLA board member. “What an awesome industry we work in.”