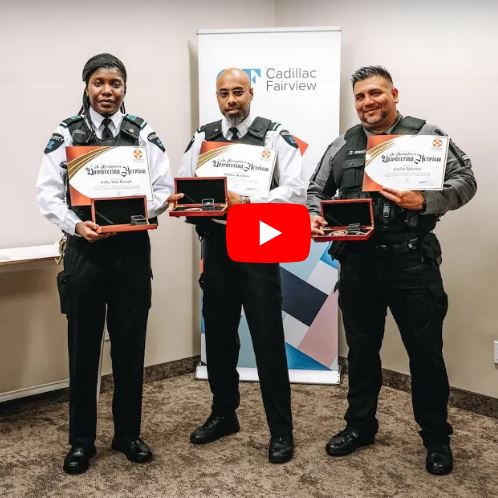 On January 6th, 2022, shortly after COVID-19 restrictions had lifted, customers were enjoying an evening shopping at CF Fairview Mall when an individual came into the mall wearing all black and a ski mask and armed with a sledgehammer and axe.

The individual quickly proceeded to Michael Hill where he began smashing window cases while the staff were serving customers. Fearing for their safety, customers fled the store, while staff on site, suffering from shock, began to break down as they feared for their life during the jewelry heist.

Jaideo Kardeo (J), a CF security supervisor for over 13 years, was on lower-level patrol when he heard people screaming and the unforgettable sound of glass smashing. When J arrived on scene, he immediately saw the fear in the eyes of the staff as the assailant continued to retrieve items from the cases (totaling just under $100,000).

As soon as the assailant saw J approaching, he proceeded to exit the mall where he ran directly into our third-party provider CanCom Security, Carlos Iglesias. In collaboration, both J and Carlos safely and effectively apprehended the assailant. The Toronto Police Service arrived shortly after to take the assailant into custody.

Jody-Ann Baugh, a former police officer and a CF security guard arrived on scene and immediately noticed how distraught the staff were and the devastation that was left behind. Jody-Ann, engaged with empathy and stayed with the staff, securing the environment and providing reassurance and support to the team.

Because the incident took place during mall hours, many customers recorded it on their phones and shared it on social channels.  Not surprisingly, the feedback was positive, and many thanked security for responding so quickly and apprehending the assailant without any further incident.

The next day I had the opportunity to speak to the Michael Hill staff who were so appreciative that security had apprehended the assailant. Many said that they wouldn’t have felt safe returning to the store if he managed to escape and was out on the loose.

For days, weeks, and even months following the incident, and with news of other malls being victims of jewelry heists, mall staff and community members continued to thank J and the security team for all they did that day.

Observing the appreciation by mall staff and the community, and knowing first hand of J and the security team’s dedication, I decided to nominate J, Jody-Ann and Carlos for the Canadian Security Lifesaver Award, as they all exceeded security expectations.

With the last two years of COVID-19 lockdowns and the high stress environment our teams sometimes have to work in, our security team stepped up, aimed higher, and alleviated the stress of being another victim.

We would like to thank Canadian Security Life Saver and its board of directors for acknowledging the efforts of all frontline staff across Canada.