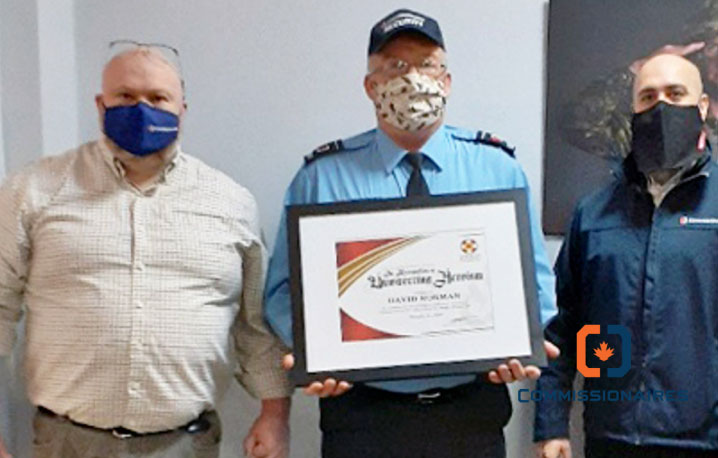 David explained the situation that led to the accolade:

On August 28, 2020, David was stationed to patrol a commercial office complex when he saw a woman sitting on the roof of the complex. A nearby witness also noticed the woman on the roof and feared for her safety. Sensing that something was wrong, David called the RCMP to explain the situation.

While David on the phone with the RCMP, the woman stood up and slipped, causing her to fall off the roof of the complex and land on the pavement below. David immediately called 9-1-1 and went to examine the woman.

Many panic-stricken witnesses tried to intervene, including one person who tried to grab the unconscious woman and lift her up. Another bystander tried to inject her with naloxone. David could see that the woman was unconscious and that a pool of blood was forming under her head. He knew the right thing to do was to control the scene and stop the bystanders from intervening until medical aid arrived.

A few minutes later, the police arrived with an ambulance and thanked David for his quick thinking and intervention.

“The entire incident of her falling is still so vivid in my mind.” said David during a phone interview.

David humbly accepted the award with thanks to the association, noting “I am very thankful. Its not easy and sometimes you wonder what it is all for sometimes, but occasionally, you get reminded that the work we do as security officers is worth it.

“Through the grace of the paramedics and police, they managed to get her off the pavement, got her breathing again, and saved her. Hopefully, she can carry on with a better life.

“Even if she helps just one person, that’s what makes this job worth it.”