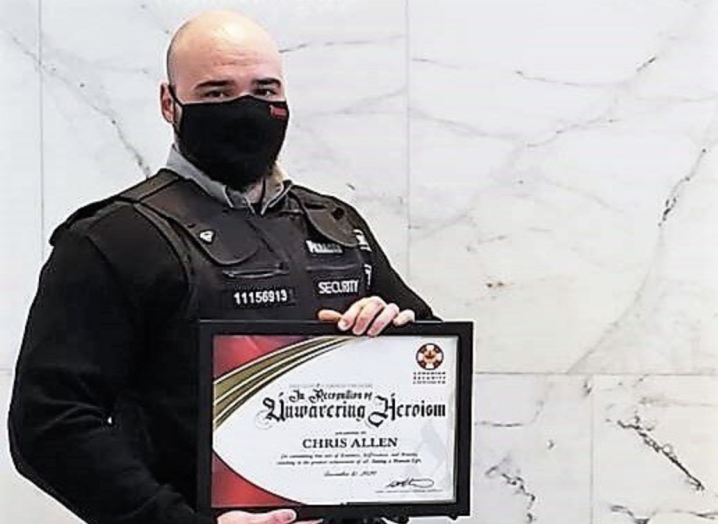 Given that January 28th is Bell Let’s Talk Day and an opportunity for all Canadians to openly discuss mental health issues that affect so many of us, it seems appropriate to give a special shoutout to our own Christopher Allen.

Chris has been recognized by the Canadian Security Life Saver Association for unwavering heroism: His actions may have saved a man’s life.

Chris was going about his day, patrolling 777 Bay Street in Toronto, when he encountered a man bleeding from his wrists. After a very brief exchange, it was obvious to Chris that the fellow was in the midst of a mental crisis and was attempting to commit suicide. Chris made the all-important call to notify 911 and get EMS on-site as quickly as possible, while he got the fellow to sit down so Chris could administer first aid.

While bandaging the wounds, Chris kept talking to the individual, keeping them calm and focused on him, keeping the situation from escalating. In fact, he did such an amazing job that the man returned several days later to let Chris know that his actions had saved his life. Two weeks later, he returned to thank Christ again and to let him know that he had sought out treatment for his mental health challenges.

Kudos to Chris and his efforts on the front lines!